with a fan with forced air circulation and filters inside.

To be used in apartments, offices, production halls, as well as in agricultural and food processing industry.

It is a device which combines the most advanced technologies which are used in order to fight viruses, bacteria, fungi and allergens.

The interior of the device is covered with TC Bacto Vir Shield nanocoating,

based on anti-bacterial coating with photocatalytic properties. Under the influence of ultraviolet radiation, it is able to break down various chemical compounds into water, carbon dioxide and non-organic anions. The coating uses a catalyst in the form of titanium dioxide (nanoTiO2), the ability of light absorption of which are strengthened by silver atoms. As a result, our anti-viral coatings TC Bacto Vir Shield, in combination with UV-emitting devices, including UVC, give the effect of coating several times stronger. POP TC AiR (nano+ UVC LED) is designed to achieve the highest efficiency of operation, in a very economical way, closing the huge purifying potential in a small device.

Our modified nano VLR photocatalyst has an amazing effect on killing almost all types of bacteria and viruses including mutant forms such as MRSA, SARS, H5N1 etc. The performance of our antimicrobial coating is maintained for a very long time thanks to the catalytic reaction mode. Our improved photocatalyst can accurately break down bacteria, viruses into H2O and CO2 as well as their endotoxins. The system based on self-cleaning guarantees effectiveness of operation, eliminating the accumulation of bacterial cells on the surface of the device (e.g. silver antibacterial process). While, the anti-microbial coating of the photocatalyst is also able to eliminate smoke and animal odour and indoor allergens, reducing the incidence of respiratory diseases. 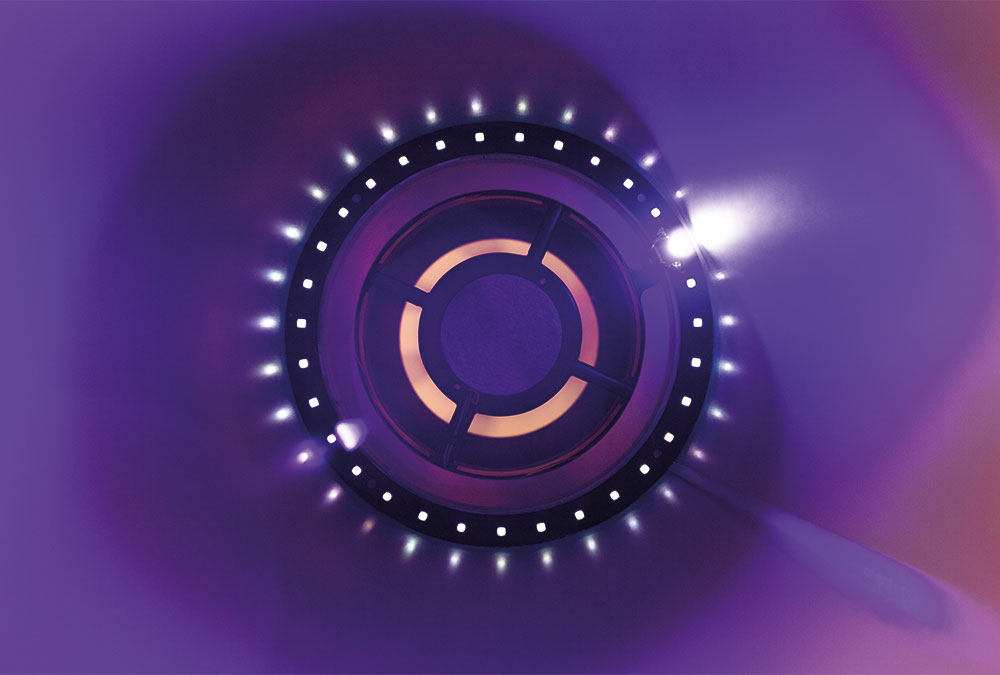 Photocatalysis is a process that accelerates chemical reactions involving ultraviolet radiation. Titanium dioxide enriched with silver atoms acts as a semiconductor that knocks electrons out of the furthest valence shell. As a result, the electrons jump in TiO2 from the baseband to the semiconductor band, where they can combine with oxygen to form active forms, namely the superoxide anion radical O2. After the electrons jump, positively charged electron holes are formed in titanium dioxide. As a result of combining them with water in the air, hydroxyl radicals are formed. Since they are deprived of one electron, they are characterized by high chemical activity and high ability to react with other compounds.

Hydroxyl radicals lead to the decomposition of complex substances into simple compounds. The activity is extremely effective against viruses and bacteria. Our nanocoatings break down the microorganisms into water and carbon dioxide, which are substances that are safe for humans.

Nanocoatings are virucidal against all enveloped viruses – HIV, HBV, HCV, influenza viruses, corona viruses (including SARS-CoV-2) and others.

It is undeniable that in the near future LED technology will displace discharge sources of UV radiation, i.e. fluorescent lamps, quartz lamps and UV lamps from individual market sectors. Also, recently created as a result of the economic situation related to the COVID-19 pandemic, sterilizers based on the so-called excimer lamps, due to their size, appearance and cost of production, are not able to threaten the imminent domination of the disinfection industry by LED technology.

What is the advantage of UVC LED over old-type artificial UVC radiation sources?

The TC AiR nano + led uvc flow air purifier is a combination of LED energy efficiency with advanced technology used in the fight against viruses, bacteria, fungi and allergens.

From now on, modern, elegant and professional equipment will guard the sterility of rooms and the health of users.

ACCURACY AND RELIABILITY OF OPERATION

The effectiveness in inactivating viral and bacterial pathogens has been confirmed by research at the Department of Biotechnology and Food Microbiology at the University of Life Sciences in Wrocław.

Our UVC LED owes its effectiveness to many technical aspects. Thanks to the use of the highest quality UVC LEDs with a semiconductor chipset from a leading Korean manufacturer in the fixture, and thanks to the use of double-cleaned JGS-1 quartz lenses with the appropriate focus, we have created an LED module, which is an extremely effective weapon in the fight against viral and bacterial pathogens.

The carefully selected radiation power of the UVC LED module with a peak wavelength of 273 nm, causes dynamic destruction and inactivation of pathogenic microorganisms. UVC LED is a virucidal and bactericidal fixture, however, with the right time of irradiation (and the resulting dose of radiation), unicellular fungi, mould spores, protozoa, mites or algae are also destroyed. Thanks to the multi-point (coming from many individual fixtures) conical radiation emission, surfaces are decontaminated by rays reaching them at different angles, thus increasing the effectiveness of destroying pathogens located on them, which fall into the so-called ‘cross-fire’.

The UVC LED system is directed towards decontamination of indoor air.

The time required for effective surface disinfection ranges from 10 minutes to 6 hours and is specified in detail in each individual simulation delivered to the customer. The average time of the UVC disinfection process recommended by the UVC LED is 3 hours. It should be remembered that the time of air disinfection through which UVC radiation penetrates is much shorter. The effectiveness of fighting airborne pathogens, as a result of direct continuous ultraviolet radiation, is incomparably greater and more dynamic than the effectiveness of UV flow disinfection lamps and ozone generators.

The operation and effectiveness of the UVC LED light have been tested in the laboratory of the Department of Biotechnology and Food Microbiology at the University of Life Sciences in Wrocław, on the following pathogens:

POP TC AIR BROCHUREPobierz
Manage Cookie Consent
To provide the best experiences, we use technologies like cookies to store and/or access device information. Consenting to these technologies will allow us to process data such as browsing behavior or unique IDs on this site. Not consenting or withdrawing consent, may adversely affect certain features and functions.
Manage options Manage services Manage vendors Read more about these purposes
View preferences
{title} {title} {title}